How To Easily Find Ancient Debris in Minecraft

Do you know what’s better than diamonds in Minecraft? Netherite, you say? In this article, we’ll guide you on finding ancient debris in Minecraft in a few simple steps so you can craft the strongest material in the game!

What is Ancient Debris?

Ancient Debris is a super rare ore with a brown and noisy texture generated in the Nether dimension. Although its texture is different compared to the rest of the blocks in the Nether, it’s still quite hard to recognize Ancient Debris in a sea of Netherrack or Basalt. Because of the Nether’s atmosphere.

Mining Ancient Debris is by far the most time-consuming and dangerous task in Minecraft since there is a high chance you will likely be falling into a lava sea or being killed by other hostile mobs.

So why do many players spend time finding it? Well, with Ancient Debris, you can obtain netherite scraps with a cooking power, and later on, you can craft the most powerful ingot in the game – Netherite Ingot!

Is it compelling enough for you to get your feet on a menacing adventure? Let’s read further!

Where to Find Ancient Debris?

You can only find Ancient Debris in the Nether biome, requiring you to build a Nether Portal first. And with that in mind, you will need to do many other things and prepare well for this journey! Below are the steps required to find Ancient Debris; some may be optional.

Start the progression like you usually do in every other Minecraft world, such as collecting wood, crafting basic tools, mining stone, and iron ores, getting some food… you get the idea!

When you find at least 3 diamonds, make yourself a diamond pickaxe with this guide!

Use some of your spare iron ingots to craft a bucket; follow the recipe above. Then fill it with water and place it in your inventor since you will need this later.

You will need to go deep underground or wander above the ground to find a lava lake. This is especially easy to notice at night due to the lava’s brightness.

Then pour a bucket of water near the lava. If a lava block is contacted with flowing water, it will be turned into an obsidian block. Mine at least 10 of them.

Each block will take up to 9.4 seconds to break. So be patient!

When you have enough obsidian, start building the nether portal by framing a 4×5 border with obsidian blocks. You can leave the corner blocks empty if you have exactly 10 obsidian. Otherwise, fill the corners so your portal looks more aesthetic!

Ignite the portal with a flint and steel after you’re done with the building step.

Before entering the portal, you must know what you’re facing. The Nether is well known as the deadly place with flowing lava, hostile mobs, and mostly fire damage.

That’s why it’s great to enchant your armor with Fire Protection, or at least Blast Protection for safety purposes. Bring some Potion of Fire Resistance is also a good choice!

Remember to bring just enough items for the ancient debris hunt. If you die, you won’t lose all your valuable resources at once!

How to Find Ancient Debris in Minecraft

Once you enter the Nether dimension, the first thing you want to do is try looking around to detect any hostile mobs and find the lowest platform you can see as possible. You may need to build a bridge to get to the desired location.

Press F3 to open the debug screen; you will notice the three coordinates X, Y, and Z with the respective number following them. Pay attention to the number after the y-axis.

Since Ancient debris is only generated between the Y layer from 8 to 22, you may want to find a solid terrain without any lava lake to dig down to this layer. And remember that the best Y level to find ancient debris in Minecraft is Y=15.

Each chunk may contain 2 to 6 maximum number of Ancient Debris blocks. That leaves a 0.001% chance of finding ancient debris for each block you break. Sometimes, you can see veins of two pieces of ancient debris together.

One thing to note is Ancient Debris will never be exposed to the air block. That means you have to dig one block at least to reveal it, unlike other ores, where you can just see them directly during cave mining.

When you’ve reached the correct y-level, there are multiple ways you can use to find ancient debris. Let’s find out!

One of the basic methods in Minecraft to mine for ores! When you are down at layer 15, choose a direction and start digging a tunnel in a 2×1 pattern to find ancient debris.

You can also apply other mining methods here, such as branch mining, staircases mining, or quarry mining. Just pay extra attention since lava will pour out at any time!

Since Netherrack’s hardness is low, you can instant mine them quickly with the enchanted diamond pickaxe.

This method seems risky at first, but the result turns out pretty great. 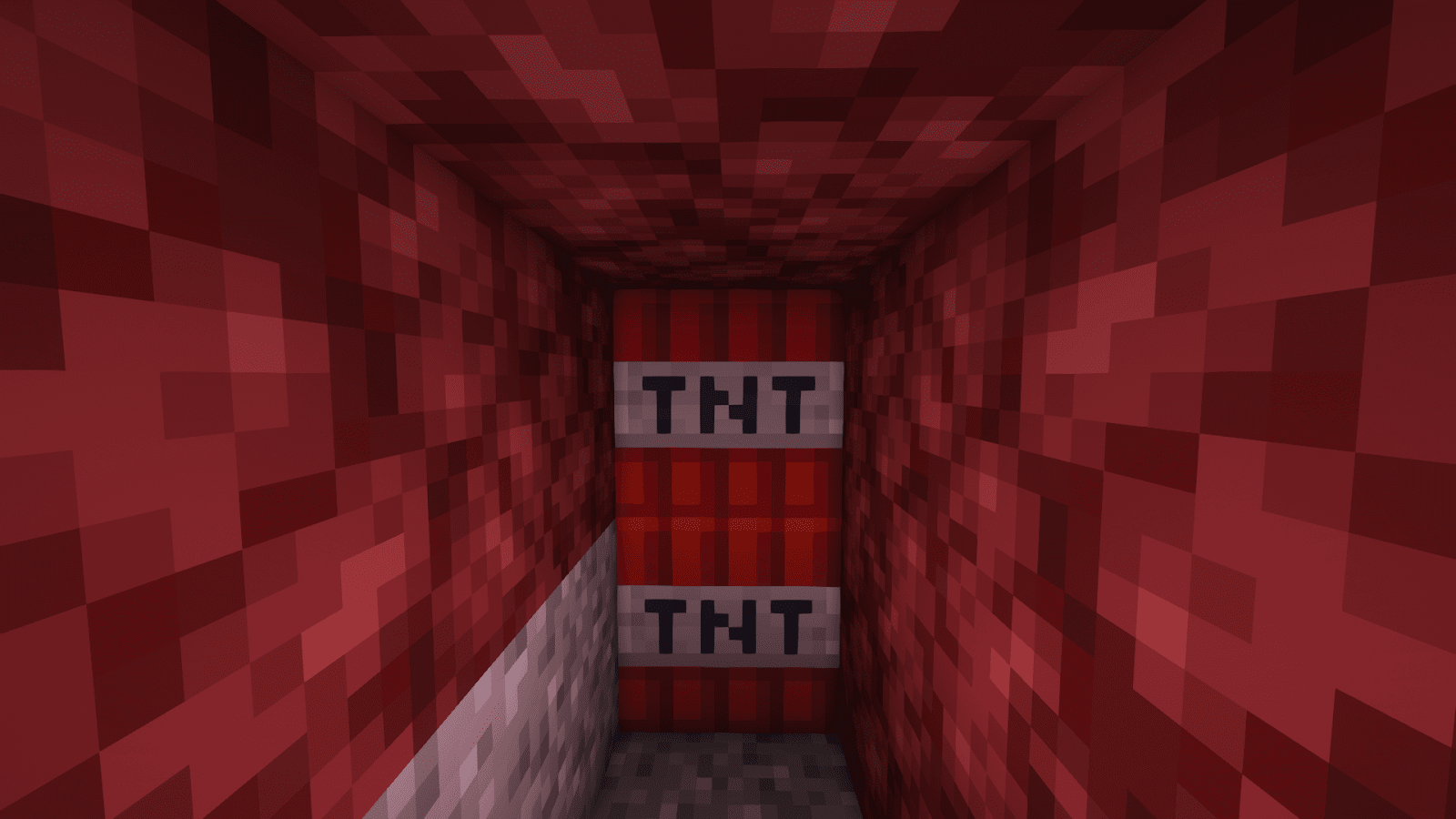 Unlike diamonds and other ores, ancient debris can’t be blown up by TNT, so this is a great way to clear the junk out of the way! But be careful because the TNT can blow up a large area, which may leave an area filled with hot lava.

TNT also damages you, so set up the TNT chain correctly and run far away when you ignite it.

Another downside of this mining method is that TNT is quite expensive to craft. You need 4x sand and 5x gunpowder to craft one.

Bed Mining is another variant of the TNT Mining method, which uses the beds’ explosion to clear out a large area. Also, the bed is far cheaper than TNT, isn’t it?

All you need to do is have a good supply of wool and wood. So you should build a sheep farm as soon as possible!

The way the bed method work is all about Intentional design by Mojang. If you try to sleep in the Nether dimension, the bed will explode instantly.

With that said, this method is super dangerous for newbies. Unless you know a way to reduce the explosion damage, such as enchanted armor or placing a block between you and the bed.

How to Use Ancient Debris in Minecraft

Once you have obtained at least 4 pieces of ancient debris, place them in the furnace (or blast furnace), and add a fuel source to smelt them into netherite scraps.

Then, you can combine 4x nether scraps with 4x gold ingots to craft a Netherite Ingot. Follow the crafting recipe below.

Later on, with the help of the Smithing Table, you can use the Netherite Ingot to upgrade existing diamond gears to netherite gear, weapons, and tools. Remember to upgrade your pickaxe to a netherite pickaxe to mine minerals faster!

You can also use netherite ingots to repair any netherite items in the anvil. The list contains a netherite helmet, chest plate, leggings, boots, sword, pickaxe, axe, shovel, and netherite hoe.

Like other minerals, you can use a netherite ingot in a beacon interface. But this usage and the anvil one is considered as a wasting method to use your netherite ingots on.

Can You Make Ancient Debris in Minecraft?

No, you can’t make or craft ancient debris in Minecraft! This is the reason why Ancient Debris is the rarest ores since you need to find them manually. So get yourself to the required y-coordinate and start mining!

Can Ancient Debris Be Blown Up?

Ancient Debris can’t be blown up because it has high blast resistance, making it immune to the explosion from both TNT and beds in Minecraft. Also, if you throw ancient debris into the lava, it won’t be burnt either! Netherite items also won’t be burnt!

Can You Get Netherite Without Mining Ancient Debris?

Absolutely yes! If you’re unfamiliar with mining in a deadly environment, you can still obtain netherite by looking for bastion remnants – the primary source of netherite scraps. They may have a chance to contain some chests with netherite scraps or netherite ingots.

The Nether update is successful so far with a lot of new features. We have new biomes, new blocks, new mobs, and especially, the new netherite ore with ancient debris as its raw material. Hopefully, this article will show you the best way to find Ancient Debris in Minecraft!

All Stats Explained in Xenoblade Chronicles 3